July 30, 2015 – To coincide with the Centenary of Gallipoli, the Australian Macquarie Mint has launched the official 2015 $10 ‘Gallipoli Landing Centenary’ Silver Commemorative Coin. 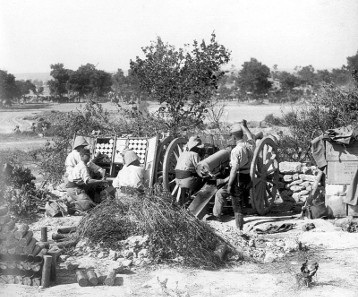 Gallipoli during the Third Battle of Krithia, 4 June 1915. Source: Wikipedia.

Capturing the commitment and sacrifice made by Australian servicemen during the First World War in brilliant silver, this coin pays tribute to the 100th anniversary of the Gallipoli Landing.
Managing Director Ken Downie said Macquarie Mint is proud to be associated with this significant event that touches so many Australians.
“This year marks a landmark anniversary for our great nation,” said Downie. “And this coin is an affordable keepsake for all Australians to treasure forever and pass onto future generations”. Depicting three Australian soldiers as they bravely approach their landing point at Anzac Cove on April 25th 1915; this 26mm diameter coin is struck to faultless quality from silver (0.500) and is accompanied by a Certificate of Authenticity confirming the mintage and specifications of this limited edition release.
“This silver commemorative presents a fantastic entry point into the world of collecting with a rare chance to honour our WWI heroes in such an affordable manner,” Downie added.

Texts, pictures and videos about the Battle of Gallipoli you may find on this History website.